We can't let our slaves go on vacation or renew their visas, because [please insert excuse here]

Another example of defending the indefensible... In today's GDN, Habib Ali Awachi and Sons Company list a plethora of excuses for not letting staff go on vacations or renewing their visas, after one of their slaves labourers complains that he hasn't been allowed a vacation for six-and-a-half years, and they hadn't renewed his visa after it expired three years ago.  The story about the man who is getting a little desparate now and claims his wife is threatening to kill herself and their two children because his company "allegedly" refuses to send him home, is printed on the same page.  He also claims there are 150 others in a similar situation.

Habib Ali Awachi and Sons Company's response is laughable and repeated below in full.  What is the Ministry of Labour or the LMRA doing if they are allowing these shenanigans to continue?  Why isn't the company blacklisted and their CR annulled?

Is there any property or infrastructure developer in Bahrain that applies ethical standards in awarding contracts to construction companies, or even attempts to vet them to ensure they meet the minimum criteria for treatment of their staff? 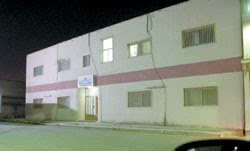 A CRISIS in the construction industry was yesterday blamed for delays in vacations and the renewal of visas at the Habib Ali Awachi and Sons Company.
Chief executive officer Zuhair Awachi admitted the visas of several workers had expired, while others had been denied holidays.
He blamed global financial turmoil, delays in payments from clients - including the government - and a tax on expat workers for crippling the construction industry.
But he claimed the company was now in the process of cancelling the visas of its workforce and sending them back home.
"We are aware that visas of some of our workers have not been renewed," he told the GDN.
"And we also know that many have applied for annual leave, but their applications have been rejected.
"We are cancelling their visas and sending them back to their countries.
"We have already sent 28 last month and 10 at the beginning of this month.
"The reason is that we didn't get BD800,000 from one of the ministries and, on top of that, we have to spend a lot of money on expat workers when we bring them to Bahrain to work for us.
"We are spending a lot of money on their training, and Labour Market Regularity Authority (LMRA) and General Organisation for Social Insurance (Gosi) fees.
"The LMRA knows our situation very well, we are suffering as a construction company and due to budget problems.
"We haven't received payment from ministries for several months and we have an official letter from them asking us to bear with them.
"We, as a local company, can only wait and try to finish the work on time - but foreign companies abandon the work and leave the country.
"What happened in the case of the Isa Town flyover? The company (Sungwon) took the government to court.
"We as locals can't do that as we are Bahrainis and we have to live and work in Bahrain, in good or bad conditions."
Mr Awachi said the company had already flown home hundreds of workers in the past six months, and said 100 more were due to leave within two months.
"We have 800 expats and 250 Bahrainis working for us and we increased the basic salary for each employee last year," he added.
"Our company is located on the road - it's not hidden and everybody knows about it.
"The problem is that we can't satisfy all our workers and, unfortunately, we have to send them back.
"Around 100 workers are already on the list and we will finish the list in two months' time.
"We are now processing their documents and finalising their settlements so that they can leave for good and forever.
"Everybody knows that liquidity in the market is very low and, for us, it was really a bad season.
"In the last six months, 240 workers left Bahrain and we are looking for more idle manpower to be sent back."
Mr Awachi revealed that family funds were being pumped into the company, but said he hoped for a quick recovery from the crisis.
"We have high hopes that Bahrain will recover soon and all the sectors, not only construction, will boom again," he added.

Zohair was as abusive & as recklessly inhuman as his father or Hitler. I witnessed it all for over 3 years as the Jews had to prior to 1945. I wish that Arab countries would liberate themselves from such cruel & disguised social evils. His elder brother was just opposite & a thorough humanitarian & so was his wife, as praised and blessed by the poor labourers fed by her kind motherly contributions.