According to the UK's Daily Mail, the islands in Dubai's World islands development are rapidly merging together and also appear to be sinking. The original article can be viewed here. 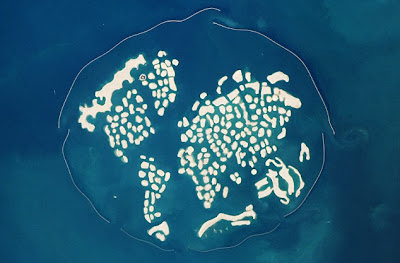 Naturally, the property developers, Nakheel vehemently deny this. Who is right? Time will tell. Certainly the NASA photo shows the huge differences in reality versus the myth that was promoted to investors (see image below). 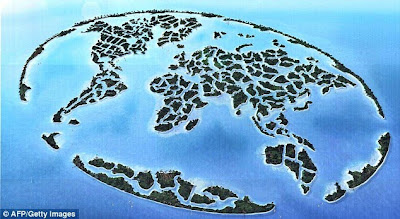 The load-bearing capacity of The World islands' reclaimed land mass is about twice that of mainland Dubai, Nakheel noted.

I'm not a geologist or construction engineer, but I'd like to see some support for that statement from someone knowledgable in this area...
What a shame Nakheel has left New Zealand off in their map of the world... I guess we can be thankful that a true paradise is not caught up in Dubai's folly.
Posted by Kiwi Nomad at 11:31 AM