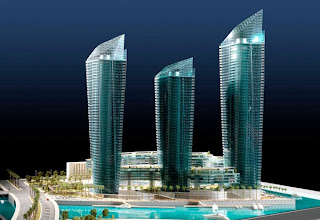 The word on the street is that most of the Villamar apartments were sold to speculators (like most of these projects, so nothing new there) who paid deposits only and then defaulted on making instalments... (and as an aside, many of those purchasers were GFH staff and associates. Given that many GFH staff have been laid off, don't expect they will be following through with their instalements!).  One building at least was bought outright by another developer on a downpayment.  They were then going to pay the original developer once monies were collected from end-users... same problem - end-users only put down deposits and then walked away/defaulted, with only 5-10% paying their instalments.
So to wrap up, speculators/end-users not paying the developer and/or other intermediaries, developer is not paying contractor, and contractor has stopped construction. Just what you would expect when a property bubble bursts, and not unexpected when the prices being fetched for dream apartments were at eye-watering levels.  And, this being the Gulf, the contractor hasn't started legal action to recover its costs yet due to the close relationship it has with the project sponsor - none other than GFH.

Of course, the word on the street maybe completely inaccurate... but any insiders are welcome to comment and tell me what I've got wrong!

Oh yeah, and the half-built development was scheduled for completion in June 2009... Aren't there any newspaper journalists out there with the guts to question Gulf Holding Company's blatant PR lies?
Posted by Kiwi Nomad at 3:45 PM